Like an increasing number of Australians I'm not going to partake in the Melbourne Cup "the race that stops a nation", at least not in a traditional manner. Such events cause trauma and death on the track, often enough, and the last race is always to the knackery. The horse racing industry is unnecessary and cruel.

I'll just leave this here for those who want to learn more:

But as a game designer I thought to myself, why not run a simulation? So here it is; "The Willsmere Cup"

The Melbourne cup was originally 2 miles (16 furlongs), so I've modified in scale to 32" because I'm using the nostalgic old measuring system here.

Each horse has a base move per thirty-second turn of 4", but with 2 FUDGE dice; I would reduce base move and increase FUDGE dice for poor weather, track quality, etc.

This means an average of 8 rolls (4 minutes) to complete the track, and potentially winnable in just 5 die rolls (2 minutes 30) with normal speeds. The actual record, again using the old length, is 3 minutes 19 or 7 rolls.

The horses in this race are:

Qilin: From China and blessed with Taoist magics, that runs a sagacious and even-paced race (base move unchanged throughout).

Ziggy: The local favourite hails from a red dust plain. Some say it's from Mars, but really it was outback Australia. Has a bit of a sparkle to their personality which can lead to erratic running (3 FUDGE dice).

Cupid: The darling of the race, a real show pony. Completely average in all racing respects (base move unchanged), but who doesn't love the unicorn-pegasus of love?

Atargatis: An Assyrian breed, known for flying starts and flowing like water, but has trouble with endurance (base move of 5 for first 2 minutes, then base move 3 after that).

Twilight: The dark horse in the race with a brooding (one could say, 'Gothic') personality from the New England region of the United States. Known for starting slow (base move 3 for first 2 minutes), but really picks up speed after that (base move 5 after that). A real stalking horse.

Race at Willsmere at 11am. Unicorn-pegasus horsies provided by Erica Hoehn.

At the starting gate. A lovely day here for a miniature unicorn-pegasus race.

And they're off! Atargatis has taken an early lead (5"), then neck-and-neck for Qilin, Cupid, and Ziggy (4"), and with Twilight (3") bringing up the rear.

Two-minute mark, traditionally the half-way point of the race. Wait! Is that a giant cat that has entered the grounds? Yes,
Manannán mac Lir is rolling in the sun and enjoying the spectacle as well. 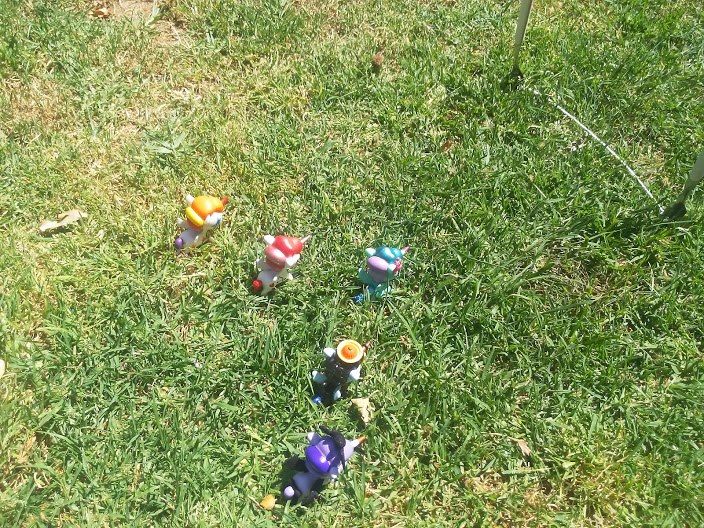