The presence of externalities, as well as public goods, gives rise to both qualitatively and quantitatively important departures from the first welfare theorem.

Some of the biggest problems facing the world are caused by negative externalities. These include global warming, pollution, congestion, urban noise, and so on. In all these cases, government policy has a crucial role to play to bring individual incentives in line with the social optimum.

Competitive markets also work poorly in the presence of public goods. However, public goods such as national defence, roads, basic public health, basic education and defence against natural catastrophes are important for any economy. Provision of such goods using receipts from taxes is a crucial role for the government in the economy.

This chapter aims to introduce a class of problems that constitute, from a policy point of view, the most important class of departures of market outcomes from those implied by the first welfare theorem.

Pareto optimum
The Pareto optimal outcome can be found simply by maximising the sum φ_1(x) + φ_2 (x). This is a consequence of the quasilinear utility function: we can simply compare the utilities from x with money amounts. Suppose we have a negative externality. Suppose the marginal utility of agent 1 from x is higher than the marginal disutility of agent 2 from x. Suppose we increase x and keep agent 2’s utility the same by transferring money to agent 2 equal to the extra disutility. Since the extra utility gained by agent 1 from the increase in x is greater than the money transferred to agent 2, agent 1 has a net gain. So whenever agent 2’s marginal disutility is lower than agent 1’s marginal utility, we can make a Pareto improvement. This leads to the idea that at the optimum the sum of marginal utilities must be zero. A similar intuition applies to the case of a positive externality.

Consider first the case of a positive externality. In this case the social benefit of x obviously exceeds the individual benefit of agent 1 the level x^∗ undertaken by agent 1 is lower than the efficient level x^o. 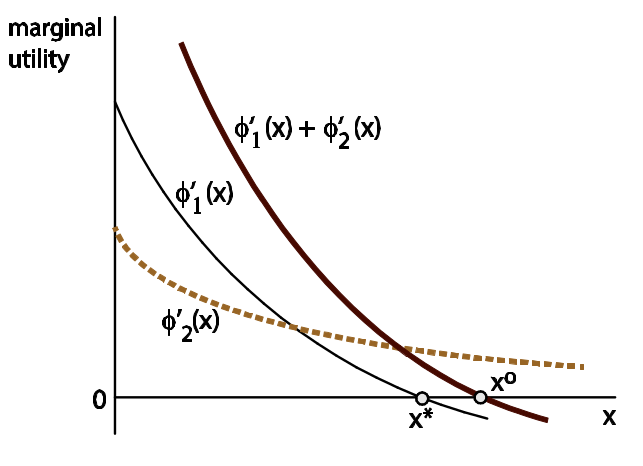 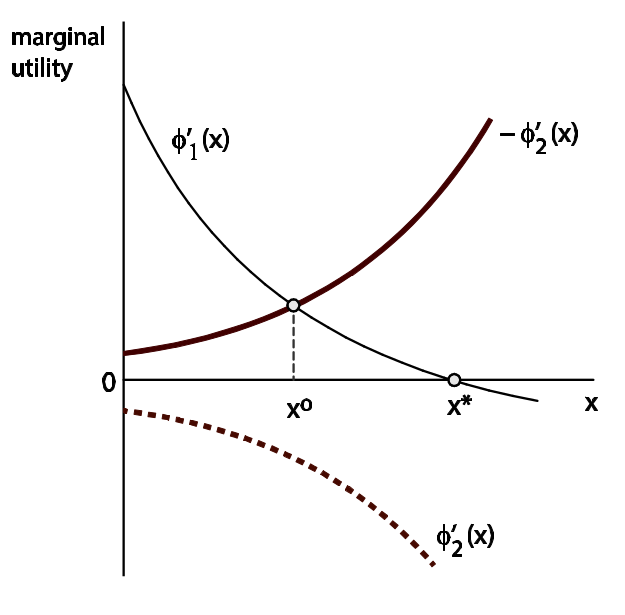 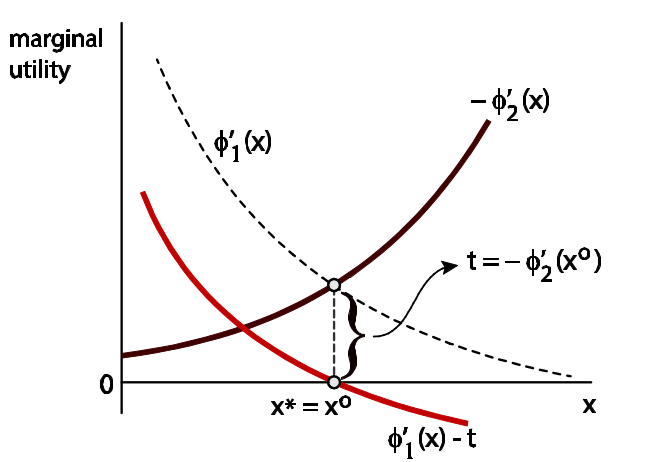 Other than tax, a quota at x^o would also, of course, restore social optimality. However, the tax and quota solutions depend on the government knowing a lot about the preferences of the agents. Absent such information, the correct level of tax or quota would be hard to gauge.

The Coase theorem is not really a theorem in the usual formal sense. It is an informal statement that expresses an idea that Coase expounded in his famous article on the social cost of externalities (Coase, 1960).

The idea is as follows. Consider a situation involving two parties where an externality arises from the action of one party. The Coase theorem says that under conditions of perfect competition (that is, under the standard assumption in the economic analysis of competitive markets that there are no transaction costs of trading), if property rights are well-defined, bargaining between parties would lead to the efficient outcome. This is true irrespective of who the property rights are allocated to (to the party generating the externality or to the party affected).

This approach says that it is unnecessary to provide incentives through taxes, subsidies or quotas. Indeed, once property rights are well-defined, it allows agents to trade in the externality-generating activity, and as in any other market under perfect competition, all beneficial trading opportunities are exploited. Furthermore, taxes can therefore only cause harm by distorting incentives. From a legal point of view, the implication is that if we do have a situation of no transaction costs, legal institutions do not matter. If one party generates, say, a negative externality for another, the law can hold either party liable for the damages and it would still result in an efficient outcome.

Coase’s argument shows that it might be logically inconsistent to treat externalities as a departure from otherwise perfect markets. If markets are indeed perfect, and some legal liability regime is in place, rational agents should be able to use the same tools that other markets use, to solve the problem of social cost from externalities. Under perfectly competitive markets and a well-defined property rights regime, social costs therefore coincide with private costs, and tax-based solutions are unnecessary and even potentially harmful.

A variety of different transaction costs can arise in reality, limiting the force of the solution in many cases. Even if there are two (or very few) parties, the parties might not have all the relevant information about each other. Preferences might be private information, a situation known formally as ‘incomplete information’. Under incomplete information, bargaining is typically inefficient (i.e. not all gains from trade can be exploited). Furthermore, even with just two parties, one or both could comprise of many individuals (an upstream chemicals firm polluting a river, generating a negative externality for the downstream community of fishermen). Negotiation then depends on those individuals being able to speak with one voice through a leader. There might also be free-rider problems if committing to a negotiation is costly in terms of time and effort. Yet further, there might be many parties involved, making negotiation difficult or even a complete non-starter.

This is the more formal message in terms of economic theory. Coase’s intended message was not that the problem of social cost does not exist or that legal institutions do not matter. He intended to argue that transaction costs do matter – and ignoring them gives us predictions that are unrealistic.

However, both messages are important. As economists looking at policy, you should carefully consider the case for a property rights based approach among other alternatives. Indeed, such ideas have influenced the creation of various pollution rights markets that have allowed reducing pollution in an efficient manner. Furthermore, you should also be aware that different types of transaction costs do arise in applications, and one must take that into account to judge the efficacy of a rights-based solution.

Public goods are goods that agents in an economy consume together and consumption is neither rival nor excludable. Examples include national defence, roads, basic public health, basic education, defence against natural catastrophes etc.

The Pareto optimal level of X can be found simply by maximising the sum of utilities minus cost. Private provision of the public good leads to a level of provision that is lower than the efficient level. Suppose the public good is provided by a competitive market. Each individual ‘buys’ some amount of the public good at the market price p. Note that any provision by an agent benefits all other agents as well. 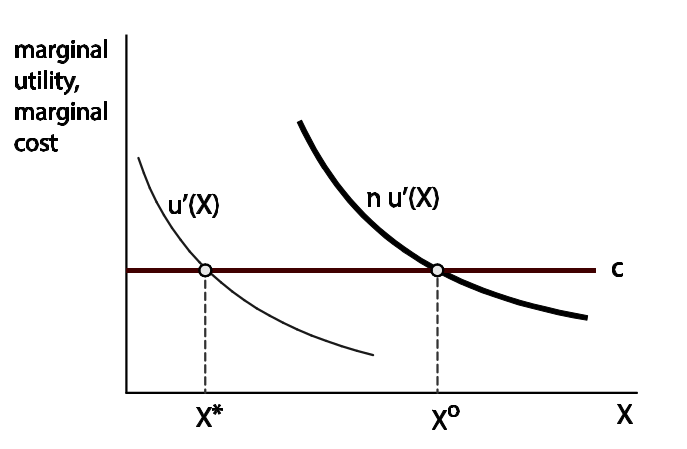 As noted in the last section, public goods are neither excludable nor rival. Private goods, on the other hand, are both rival and excludable. However, many resources are rival but not excludable. This gives rise to an over-exploitation issue known as the commons problem or the ‘tragedy of the commons’. Stavins (2011) notes that the consequences of open access predicted by theory have been validated repeatedly with empirical data.

A common property resource is being used by n agents to produce an output Q. The effort expended by agent i in extracting the resource is denoted by L_i. The production function is Q = L. Let c be the constant marginal cost of extraction facing any agent. Finally, suppose the output share of agent i is given by:

Let us first work out the socially-optimal level of L. This is given by L 0 such that:

As we know from above, the efficient solution is obtained when n = 1. If a single agent is assigned the right to extract, efficient extraction results.

Just as in pollution control (described above), the government could set an overall quota and issue individual transferable quotas (ITQs) that can be traded. Trading ITQs ensures that these go to those with the lowest cost of exploitation.

A tax would also restore efficiency. Note, however, that setting a tax optimally requires a lot of information, which the policymaker might not have.

Note that the Nash equilibrium in the game above is akin to the Prisoners’ Dilemma equilibrium. If all agents could agree to hold back their extraction, everyone would be better off. However, more exploitation than this level is best for each individual, so that no-one holds back in equilibrium.

Just as in the Prisoners’ Dilemma, there is scope for cooperation in equilibrium if the game is repeated. This type of approach can explain how several rural societies, especially in third-world countries, have been able to overcome a variety of problems involving local commons resources.

Note that the Nash equilibrium in the game above is akin to the Prisoners’ Dilemma equilibrium. If all agents could agree to hold back their extraction, everyone would be better off. However, more exploitation than this level is best for each individual, so that no-one holds back in equilibrium.

Just as in the Prisoners’ Dilemma, there is scope for cooperation in equilibrium if the game is repeated. This type of approach can explain how several rural societies, especially in third-world countries, have been able to overcome a variety of problems involving local commons resources.

An externality is an effect of one economic actor’s activities on another actor’s well-being that is not taken into account by the normal operations of the price system.

Social costs: Costs of production that include both input costs and costs of the externalities that production may cause.

Property rights: The legal specification of who owns a good and the trades the owner is allowed to make with it.

Common property: Property that may be used by anyone without cost.

Private property: Property that is owned by specific people who may prevent others from using it.

Coase theorem: If bargaining is costless, the social cost of an externality will be taken into account by the parties, and the allocation of resources will be the same no matter how property rights are assigned.

Pigovian tax: A tax or subsidy on an externality that brings about an equality of private and social marginal costs.

Given this configuration, it is clear that R* is the optimal level of pollution reduction. For reductions less than R* (say, R L ), the marginal benefits associated with further tightening of environmental controls exceed the marginal cost of achieving lower pollution levels, so emissions should be reduced further. Reductions in excess of R* are also inefficient—environmental control can be pushed too far. At R H , the marginal cost of emissions control exceeds the marginal benefits obtained, so less- strict regulation may be desirable. To noneconomists, the notion that there is an
optimal level of pollution (that R* is less than 100 percent) may sound strange, but this result reflects the general principles of efficient resource allocation we have been studying throughout this book.

Nonexclusive goods: Goods that provide benefits that no one can be excluded from enjoying.

Nonrival goods: Goods that additional consumers may use at zero marginal costs.

Public goods: Goods that are both nonexclusive and nonrival.

Because a public good is nonexclusive, the price that people are willing to pay for one more unit (their marginal valuations) is equal to the sum of what each individual would pay.

Free rider: A consumer of a nonexclusive good who does not pay for it in the hope that other consumers will.

Compulsory Taxation
The free-rider problem is inescapable. Hence, some compulsory mechanism must be found to ensure efficient production. Most often, this solution relies on some form of tax-like measure.

Lindahl equilibrium Balance between people’s demand for public goods and the tax shares that each must pay for them.

Although the Lindahl equilibrium is efficient, computation of the optimal tax shares requires knowledge of individuals’ demands for public goods. A major problem is how to get people to reveal those demands. In usual market transactions, people reveal their demands by either choosing to buy or not to buy a given product.
p589