The Worst of English

Presentation to the School of Languages, Friday December 14, 2012

Can "ghoti" be pronounced "fish"?

The first published reference is in 1874, citing an 1855 letter that credits ghoti to one William Ollier Jr.

One of the biggest problems of people learning English is that letters and letter combinations have an inconsistent sound. See the excellent poem "The Chaos" by Gerard Nolst Trenité which first appeared in his 1920 textbook..

Could "ghoti" it be entirely silent?

English has a very high number of silent letters which are differentiated as follows:

- Auxiliary letters, where two letters are combined to a single sound. These aren't really silent as such, but rather are create new sounds which aren't represented in English as a letter (e.g., the "th" in "thin", the "ng" in "sing", the "ph" rather than "f" for "physical", double consonants such as "bb" in "clubbed").

Sometimes silent letters are necessary due to the lack of consistency in English preceding vowel pronunciation (e.g., "rid" "ride").

3. A Multiplicity of Plurals

A full table (with more, and examples)

This also happens with so-called "swear" words. The Norman French version are considered "polite" and acceptable in good company, whereas the Anglo-Saxon equivalents are not (e.g., penis, vagina, copulate). Ironically sometimes people excuse themselves when using an Anglo-Saxon profanity with the phrase "Excuse my French"!

Where did this unholy mess come from?

Orthography is the correlation between graphemes (written symbols) correspond to the phonemes (spoken sounds) of the language. Languages which are very phonetically consistent with their orthography include: Esperanto, Turkish, Serbo-Croatian, Castillan Spanish, Swahili, Mongolian, and Hindi. Language which are not phonetically consistent include: French (the latter is mostly consistent, but with complex rules), German, and possibly the worst, is English. Nearly every sound can be spelled in multiple ways, and most spellings and all letters can be pronounced in many different ways.

Why has this happened? English is mostly a combination of two language families (mostly Anglo-Saxon from the Germanic languages and Norman French from the Romance languages), with a little bit from others (Greek, Celtic) included. English dictionaries are based on etymology rather than pronounciation. Also, there is has never been a wholesale reform of English spelling, with the exception of the Webster dictionary, which was only adopted by the United States (e.g., labour and labor, centre and center). 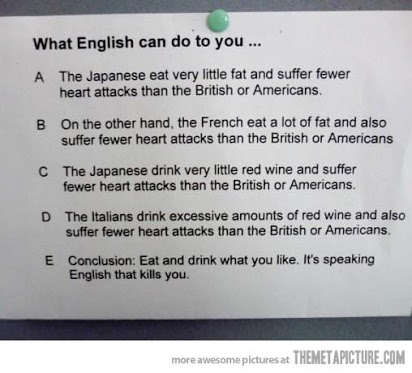 Apropos I have been reminded

Apropos I have been reminded of James Nicoll's now-famous remark on the English language from usenet.

"The problem with defending the purity of the English language is that English is about as pure as a cribhouse whore. We don't just borrow words; on occasion, English has pursued other languages down alleyways to beat them unconscious and rifle their pockets for new vocabulary."

Sometimes however the prefix "in" because an active verb prefix rather than a negative. This leads to the hazard where "flammable" and "inflammable" both mean something that can catch on fire.