Companion of Harlequin. Much loved by all. Died 18th May 2005 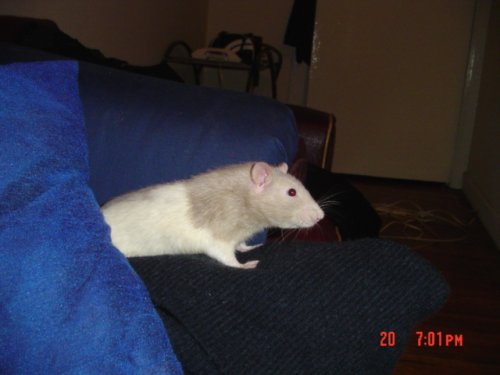 My initial post on Monte explains the circumstances of his death. I am very touched by all your comments. Thank you.

This is a remembrance of his life, which spanned roughly 2 years, 9 months (roughly 58 human years).

Although suffering from mycoplasma pulmonis for all of his life, causing wheezing (or a "snortling" sound), Monte was an extremely active and fit rat, quite capable of rapid movement and very fond of climbing. He was an explorer of every nook and cranny, who would travel far and wide on his outdoor adventures, in extreme contrast to his more sedentary companion.
His personality initially was extremely independent and he would often play a little aggressively with Harlequin. Even as he aged, he treasured his space and on one occassion bit the toe off Rogue, a young newcomer to his domain.

Another activity which he excelled at was stashing food for some future purpose. Whilst not uncommon in the species by any stretch of the imagination, or in any species with a concern for their future, Monte took it too new epic levels. Particularly fond of corn on the cob, he would transport said cobs all over the flat to preferred locations. This is despite the fact that the cobs were invariably somewhat larger than he was. The sound of *shuffle* *clunk* was initially perplexing. But only once.

These descriptions however may paint an incorrect picture. Although proud of his independence, he spent a great deal of time working next to me in my desk drawer (although I'm fairly sure the taxation office wouldn't consider him a business expense) and, as bonds form, he become extremely affectionate and desirous of human company. He learned that he could remain independent and accept affection, a skill which all people who are of an independent disposition must learn. 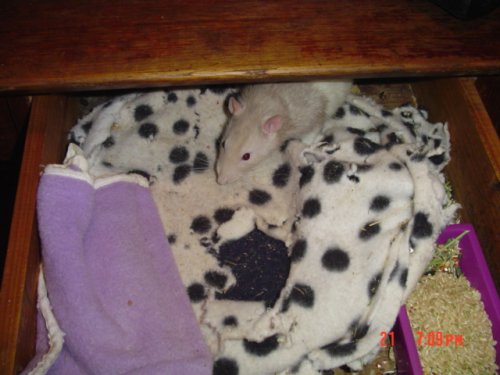 Perhaps another trait among independent people, Monte also had a strong sense of responsibility and care to his companion. When Harlequin was sick and aged, Monte almost insisted his presence in his most sacred of spaces, the desk drawer. There he would nurture and groom the ailing Harley painfully aware of their impending separation.

When Harlequin died, Monte went into a period of profound grieving and lost a great deal of his previously extraordinary vitality. When Erica and I went to New Zealand for a conference-cum-business-cum-holiday we were concerned we may return to bad news. However, we left him in the capable hands of Bronwyn, a skilled and affectionate rat-breeder, who introduced him to some one hundred and fifty other rats which cheered him up no end. When we returned he was in much better spirits.

Time however has a heavy toll, and despite being on medication the scourge of mycroplasma weakened the old man. In his last months, his eyesight declining rapidly and going completely blind in one eye, he turned to relaxation and restive contemplation. He still enjoyed the outdoors, chewing on grass, soaking up the sun, but gone was his desire to discover and investigate every sand-dune or every tree.

He was so obviously aware of his hour of reckoning. At one point he, with assistance, climbed on to my knee scanning and sniffing for something that was not there. After that he returned to my chest and rested his head, breathing his last breaths. Even when his heart had stopped he fought on, not wanting to die, not wanting to leave. He always was the battler, even in his last moments.

Is this anthropmorphism misplaced? For those who think this may be so, let it be justly tempered. A human being in the developing world lives a life far worse than most pets in advanced societies. It has been, only slightly tongue-in-cheek suggested that perhaps we should adopt people in the third world instead. Of course, the divisive programme of "child-sponsorship" already does that.

What must be acknowledged however, in addition to a principle of loving all life that one encounters and seeking to minimise all suffering and pain, that these little rodents bear a surprising degree of sophistication, charm, intelligence and diverse personalities. Their poor reputations are invariably due to the poor conditions they are brought up in and the subsequent personality disorders that result.

A critic once suggested that if socialism was a science they would have tested it on rats first. Ironically, if said critic was a little more scientific themselves, they would have accumulated the empirical evidence of how these creatures behave, and how their personality and character develops, if brought up with love, affection, solidarity and care. Maybe then they would have, with a modicum of imagination, considered the possibility of entire society where people display love, affection, solidarity and care to one another.

"Oh no, you couldn't possibly have that!" 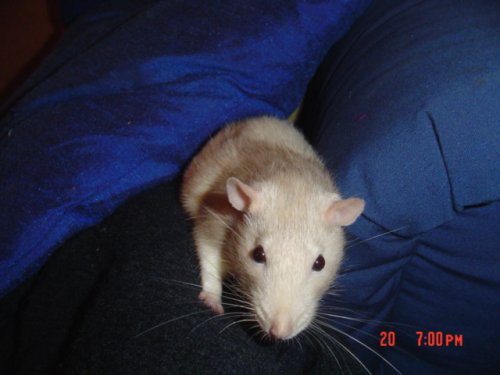 "Do not go gentle into that good night,
Old age should burn and rave at close of day;
Rage, rage against the dying of the light.

Though wise men at their end know dark is right,
Because their words had forked no lightning they
Do not go gentle into that good night.

Good men, the last wave by, crying how bright
Their frail deeds might have danced in a green bay,
Rage, rage against the dying of the light.

Wild men who caught and sang the sun in flight,
And learn, too late, they grieved it on its way,
Do not go gentle into that good night.

Grave men, near death, who see with blinding sight
Blind eyes could blaze like meteors and be gay,
Rage, rage against the dying of the light.

And you, my father, there on the sad height,
Curse, bless, me now with your fierce tears, I pray.
Do not go gentle into that good night.
Rage, rage against the dying of the light."