Moral hazard arises when the behaviour of an individual changes as a result of entering into a contract. The asymmetry in information here is described as *hidden action*, as distinct from that of *hidden information* or adverse selection.

The issue can be studied more generally as a principal-agent problem. Many economic transactions have the feature that unobservable actions of one individual have direct consequences for another, and the affected party may seek to influence behaviour through a contract with the right incentives. In the above example, the insurance company (the principal) is affected by the unobservable carelessness of the insured (the agent): it then chooses a contract with only partial insurance to preserve the right incentives. Other economic relationships of this type include shareholders and managers, manager and salespersons, landlord and tenants etc. In the following sections, we specify a model to capture an effort choice problem and suggest contractual solutions.

The previous chapter introduced the problem of adverse selection or hidden information. This chapter aims to introduce the class of problems called moral hazard that arises when actions of an agent are hidden. The chapter considers a principal-agent relationship and aims to show how moral hazard and risk attitudes interact in determining the optimal form of incentive contracts offered by the principal to the agent.

A principal (P ) hires an agent (A) to carry out a particular project. Once hired, A chooses an effort level, and his choice affects the outcome of the project in a probabilistic sense: higher effort leads to a higher probability of success, and that translates into a higher expected profit for P . If the choice of effort was observable, P could stipulate, as part of the contract, the level of effort that is optimal for her (that is, for P ). When effort cannot be monitored, P may yet be able to induce a desired effort level, by using a wage contract with the right incentive structure. What should these contracts look like? The formal structure can be set up as follows:

1) Let e denote the effort exerted by the agent on the project. A can either work hard (choose e = e_H ) or take it easy (choose e = e_L ). An informational asymmetry arises when the choice of e cannot be monitored by P .

Let the random variable π denote the (observable) profit of the project. Profit is affected by the effort level chosen, but is not fully determined by it. (If it was fully determined, the principal can infer the true effort choices by observing the realisation of π: we would no longer be in a situation of hidden actions.) Higher effort leads to higher profit in a probabilistic sense. Assume that π can be either high (π_H ) or low (π_L ). Let P (π | e) be the probability of π under effort e.

3) The principal is risk-neutral: she maximises expected profit net of any wage payments to the agent.

Note the central conflict of interest here. The principal would like the agent to choose higher effort, since this leads to higher expected profits. But, other things being equal, the agent prefers low effort. However, (to anticipate our conclusion), if the compensation package is carefully designed, their interests could be more closely aligned. For instance, if the agent’s compensation increases with profitability (by means of a profit-related bonus, say), the agent would be tempted to work hard (because high effort will increase the relative likelihood of more profitable outcomes). However, this will also make the agent’s compensation variable (risky), and that is not so efficient
from a risk-sharing perspective. The inefficiency in risk-sharing will be an unavoidable consequence of asymmetric information.

6) Let u_0 be the reservation utility of the agent. This is the expected utility the agent gets from alternative occupations.

Suppose effort is observable. The principal can then write a contract with the agent directly specifying effort. Suppose the principal wants to specify e_H . What wage must be paid?

The agent would agree to undertake e H so long as he obtains a utility of at least u_0.

This is called the agent’s participation constraint (PC). This is given by:

Optimality of a fixed wage under observable effort

Which wage schedule should the principal choose to implement e_H ? If the agent chooses effort e_H , the principal gets the surplus:

The principal can simply pay a fixed wage w^∗∗ that just satisfies the agent’s PC to implement e_L . Here w^∗∗ is given, as in the full information case, by:

We know from above that under asymmetric information, implementing e_L is a trivial problem. However, implementing high effort is a non-trivial problem. Now the principal not only must ensure that the agent accepts the wage contract, the agent must also be given some incentive to ensure that he exerts high effort e_H . Specifically, the wage schedule {w_H , w_L } that the principal offers must satisfy the two constraints described below.

1) The wage schedule must satisfy the agent’s PC, i.e. it must be such that the agent’s payoff under e_H is at least as large as u_0 :

Note that a fixed wage cannot satisfy the IC. If the wage is fixed, we have w_H = w_L = w . Putting some risk on the agent is unavoidable in providing an incentive for high effort. To determine the optimal values of w_H and w_L , we need to maximise the surplus of the principal subject to the PC and IC.

Using game theory, we will analyze a series of models in which one player has better information about the uncertain economic environment than others. This extra information is variously referred to as hidden, private, or asymmetric information. Game theory will enable us to better understand the
range of clever strategies that might be used to cope with asymmetric information. Even if market participants can resort to such clever strategies, the market will be less efficient than if all
participants had full information.
p529

Moral-hazard problem: A version of the principal-agent model in which the agent’s action is private
information.

Adverse-selection problem: A version of the principal-agent model in which the agent’s type is private information
p532 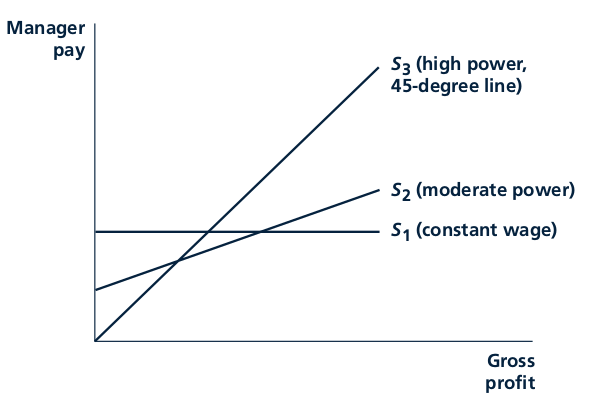 Lines S_1 , S_2 , and S_3 correspond to various incentive contracts, which link the manager’s pay to the firm’s performance (here, gross profit). The slope of the incentive scheme is also called its ‘‘power.’’ It is a measure of how closely linked the manager’s pay is with firm performance, ranging from no linkage (constant wage, line S_1 ) to a one-for-one linkage
(high power, line S_3 ).
p535

High-powered incentives would seem to solve the moral-hazard problem. Unfortunately, there are factors outside of our simple model that lead to problems with high-powered incentive schemes. The problem that has received the greatest attention in the economics literature is risk aversion on the part of managers. Suppose that there is uncertainty regarding the firm’s gross profit. While the manager’s effort will increase the chance of high profits, there are other random factors outside of the manager’s control that also may matter. If gross profit depends on random factors in addition to
the manager’s effort, then tying the manager’s pay to gross profit will introduce uncertainty into the manager’s pay. The higher the power of the incentive scheme, the more uncertainty is introduced .... Managerial risk aversion would not prevent the shareholders and manager from attaining the efficient outcome if effort were observable.
p536,538

To summarize the main point of this subsection, there is a trade-off between effort incentives and risk. High-powered incentive schemes induce a lot of effort, but expose risk-averse managers to a lot of risk and may require a high fixed payment to the manager to accept the risk. At the other extreme, a constant wage induces no effort but does not expose the manager to any risk. The optimum in the
presence of a risk-averse manager may involve some compromise between the two extremes.
p538