Walk on the Wild Side; "A Curious Incident" At Willsmere 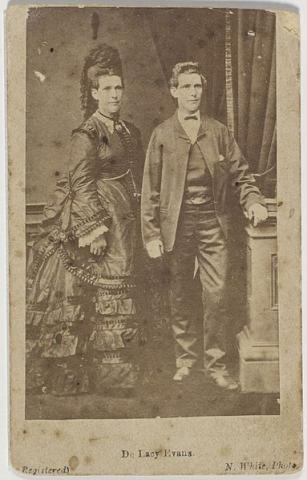 In 1856, Ellen Tremayne, a housemaid, travelled to Australia aboard the Ocean Monarch. But Ellen travelled with a trunk full of male attire bearing the name "Edward De Lacy Evans". Was Ellen really a man impersonating a woman? Speculation was rife aboard the ship, with inneudo that he was forming "sexual attachments" with the women he shared a cabin with, including one Rose Kelly, Mary Montague, and Mary Delahunty. Others suggested that Edward had planned to travel with Ellen, but abandoned her, leaving her with the trunk, so to speak.

After working as a maidservant for a Melton hotelkeeper for a week, Ellen gave up this position and remade association with Mary Delahunty, a governess. Adopting the nominal "male" attire and the name 'Edmund De Lacy' they married at St. Francis' Roman Catholic Church; they were both, after all, from Ireland. The marriage however did not last, and several years later Mary left Edward to marry an American mining surveyor.

For his own part, Edward (aka Ellen and Edmund) de Lacy Evans married a 23 year old Irishwoman, Sarah Moore. Five years later Moore died of tuberculosis, and Edward married Julia Marquand the following year. In 1877, Julia gave birth to a daughter named "Julia May" by the couple. Evans supported a child maintenance suit against her brother-in-law, Jean Bapiste Loridan for the child, but listed himself as the father on the birth crtificate. Evans noted at the time he was "deeply disturbed by the circumstances in which his wife became pregnant".

Two years later, Loridan took Evans to the Bendigo hospital, claiming that he was "dangerous to others". When told to take a bath, he refused and escaped. After capture a magistrate determined that Evans was suffering from "softening of the brain" and would be involuntarily committed to a lunatic ward at Bendigo hospital, where he was then tranferred to the Kew Asylum.

The events at the Kew Asylum were described in The Argus on 3 September 1879, p2:

"A curious incident has occurred at Kew Lunatic Asylum. A lunatic was brought from Sandhurst by the police, and was admitted into one of the male wards. The patient was tolerably quiet until preparations were made for giving 'him' the usual bath. On the attendants attempting to carry out the programme, violent resistance was made, the reason for which proved to be that the supposed man was in reality a woman. The most singular part of the affair is that the woman had been received into Sandhurst Hospital as a male patient and sent thence to the asylum under the name of Evans. She states that she has lived at Sandhurst for many years dressed in male attire. Her age is about 35."

The Bendigo Advertiser also indicated its surprise the following day:

"One of the most unparalleled impostures has been brought to light during the past few days, which it has ever been the province of the press of these colonies to chronicle, and we might even add is unprecedented in the annals of the whole world. A woman, under the name of Edward De Lacy Evans, has for 20 years passed for a man in various parts of the colony of Victoria... As it is almost impossible to give an account of the case without making use of the masculine pronoun when referring to Evans, we propose to use that appellation...

To continue the rule used by the Advertiser, Evans himself recalled:

"The fellers there took hold o' me to give me a bath, an' they stripped me to put me in the water, an' then they saw the mistake. One feller ran off as if he was frightened; the others looked thunderstruck an' couldn't speak. I was handed over to the women, and they dressed me up in frocks and petticoats."

Sent back to Bendigo Hospital, they declined a request by the Kew Asylum to return Evans as he "was improving daily, and will soon be in a fit state to be discharged" and was so. In 1881, the thrice-married Evans had applied for admittance to a Benevolent Asylum and he was sent to the Melbourne Immigrants' Home in St Kilda Road. He remained there until his death, twenty years later, on 25 August 1901.