Variations: May be served on the rocks or in a lowball tumbler. Don't beat yourself up if you use tinned or fresh cherry.

Taste: An great collection of flavours for those who like their drinks with a bit of punch, alternating between sour, bitter and sweet. Plus the colour is glorious. Usually considered a before-dinner drink to get the appetite going, but I have never heard cause for complaint whenever it is offered. If you really want to put a start on your day, try it for breakfast. Joking, not joking.

Story: More than a decade ago this was the feature drink at a cocktail party I hosted in an art deco apartment in Ripponlea, which really suited the New York style theme. It was a beautiful and crazy night with interstate and even international visitors. The interstate visitor, was a slight woman who, apart from having one arm, is also an incredible model, used to a network engineer, Olympian, pole dancer and fitness instructor. She also would get utterly smashed on a single drink and made quite a night of it. An artist friend late in the night decided it was opportune to put "Deep Throat" on the video. "What? She exclaimed, downing another drink, "I've never seen it". A pet rat became an object of endearment to the party. One of our guests, a normally very grumpy individual (he sees more than most of us), gets the dedication for this drink for actually agreeing it was damn tasty. He ended up crashing on the lounge-room floor only to be woken the next morning by a rabbit chewing on his hair.

"I think it means exactly what it says. It is a terrorist song. I think it's a response to terrorism. There's something about terrorism that I've always admired. The fact that there are no alibis or no compromises. That position is always very attractive. I don't like it when it's manifested on the physical plane – I don't really enjoy the terrorist activities – but Psychic Terrorism. I remember there was a great poem by Irving Layton that I once read, I'll give you a paraphrase of it. It was 'well, you guys blow up an occasional airline and kill a few children here and there', he says. 'But our terrorists, Jesus, Freud, Marx, Einstein. The whole world is still quaking.'"
-- Leonard Cohen 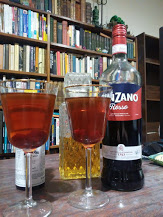