Recipe: Tall glass with ice, 2 parts orange juice, and 1 part vodka (Wallbanger) or 1 part tequila (Fuddpucker). Add, over a spoon to break it up and become a float, one part Galliano L'Autentico. Garnish with orange, blood orange preferred

Taste: Deceptively delicious. The health-giving effects of the orange juice (look, it has five health stars on the bottle) is followed up with having your brain smashed out with the brick of vodka or tequila. At least the Galliano gives you that sweet vanilla alcoholic hint of the freight train that is coming.

Story: The generally accepted story for the origins of the Wallbanger cocktail was 1950s Hollywood named after a local regular Tom Harvey. An amusing variation is the invention was entirely random with a person banging their head against a wall after imbibing too much. The beautifully naive version is asking what "wallbanger" means and being informed that ... and I have to quote in full "is that Galliano is a super tall bottle so it usually sits on the back of the bar against the wall and when pulled out it bangs the wall". Isn't that cute? I'd love to know their explanation of "Fuddpucker" is. 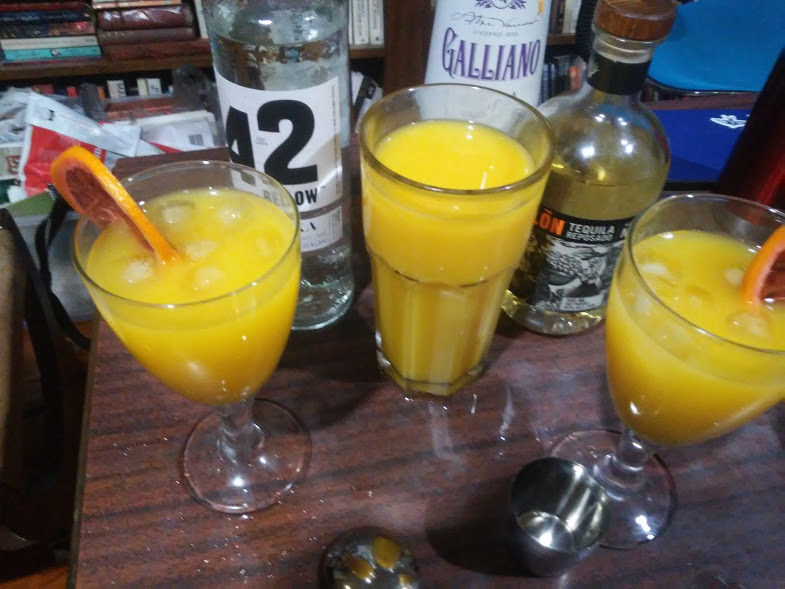