In the previous chapter, we studied consumer choice in environments that had no element of uncertainty. However, many important economic decisions are made in situations involving some degree of risk. In this chapter, we cover a model of decision-making under uncertainty called the expected utility model. The model introduces the von Neumann–Morgenstern (vN–M) utility function. This is unlike the ordinal utility functions we saw in the previous chapter and has special properties. In particular, the curvature of the vN–M utility function can indicate a consumer’s attitude towards risk. Once we introduce the model, we use it to derive the demand for insurance and also introduce a measure of the degree of risk aversion.

Random variable
A variable that represents the outcomes from a random event. A random variable has many possible values, and each value occurs with a specified probability.

Expected value of a random variable

Expected utility theory was developed by John von Neumann and Oscar Morgenstern in their book The Theory of Games and Economic Behavior. (Princeton University Press, 1944; expected utility appeared in an appendix in the second edition in 1947).

Recall that a function f (W ) is concave if f 00 (W ) function with respect to W is negative.

Suppose G is a gamble which yields 20 with probability 1/2, and 10 with probability 1/2. Suppose an agent has wealth 15 and is given the following choice: invest 15 in gamble G, or do nothing. Note that the expected value of the gamble, E(G), is exactly 15, so that this is a fair gamble (the expected wealth is the same whether G is accepted or rejected).

3.6 Risk aversion and demand for insurance

A risk-averse individual would pay to obtain insurance. To see that, it is useful to define the certainty equivalent (CE) of a gamble. The CE of a gamble is the certain wealth that would make an agent indifferent between accepting the gamble and accepting the certain wealth. The CE is lower than the expected income of 10. Suppose an agent simply faced gamble G (i.e. did not have the choice between G and 10, but simply faced G). Clearly, since the CE is lower than the expected outcome of G, this agent would be willing to pay a positive amount to buy insurance. How much would the agent be willing to pay? The amount an agent pays for insurance is called the risk premium.

This is given by:

W is a concave function

The maximum premium to pay to buy full insurance: Calculate the certainty equivalent of the gamble

Suppose a risk-averse agent has wealth W , but faces the prospect of a loss of L with probability p, where 0

3.8 The Arrow–Pratt measure of risk aversion

However, this would not be ideal for the following reason. We know that a positive affine transformation of u, say u b = a + bu, where a and b are positive constants, does not change attitude towards risk. But such a transformation would change the second derivative and, therefore, change the risk measure. This problem could be avoided if u'' is divided by u' . Furthermore, since the most common risk attitude is risk aversion, and for this case u''

Two statistical concepts that originated from studying gambles of chance, probability and expected value, are very important to our study of economic choices in uncertain situations.
p139

Probability: The relative frequency with which an event occurs.
Expected value : The average outcome from an uncertain gamble.
Fair gamble: Gamble with an expected value of zero. p140

Risk aversion: The tendency of people to refuse to accept fair gambles. p142

Bernoulli [identified risk aversion] (and most later economists) assumed that the utility associated with the payoffs in a risky situation increases less rapidly than the dollar value of these payoffs. That is, the extra (or marginal) utility that winning an extra dollar in prize money provides is assumed to decline as more dollars are won. p142 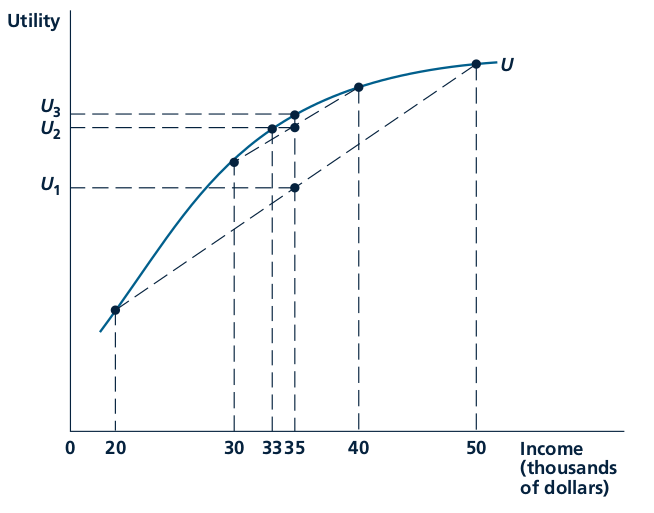 Choosing among Gambles
To solve problems involving a consumer’s choice over gambles, you should proceed in two steps. First,
using the formula for expected values, compute the consumer’s expected utility from each gamble.
Then choose the gamble with the highest value of this number. p143

The less U bends (that is, the more linear U is), the less risk averse is the person. In the extreme, if U is a straight line, then the person will be indifferent between a certain outcome and a gamble with the same expected payoff. In other words, he or she would accept any fair gamble. A person with these risk preferences is said to be risk neutral. p144

Fair insurance: Insurance for which the premium is equal to the expected value of the loss. p146

Risk-averse individuals will always buy insurance against risky outcomes unless insurance premiums exceed the expected value of a loss by too much. p146

Those who expect large losses will buy insurance, whereas those who expect small ones will not. This adverse selection results in the insurer paying out more in losses than expected unless the insurer finds a way to control who buys the policies offered. p146

Diversification: The spreading of risk among several alternatives rather than choosing only one. p149