In many economic situations agents must act strategically by taking into account the behaviour of others. Game theory provides a set of tools that enables you to analyse such situations in a logically coherent manner. For each concept introduced, you should try to understand why it makes sense as a tool of analysis and (this is much harder) try to see what its shortcomings might be. This is not the right place to ask questions such as ‘what is the policy-relevance of this concept?’. The concepts you come across here are just tools, and that is the spirit in which you should learn them. As you will see, some of these concepts are used later in this course (as well as in a variety of other economics courses that you might encounter later) to analyse certain types of economic interactions.

The chapter aims to familiarise you with a subset of basic game theory tools that are used extensively in modern microeconomic theory. The chapter aims to cover simultaneous-move games as well as sequential-move games, followed by an analysis of the repeated Prisoners’ Dilemma game.

Consider the following game. Each player has two strategies C (cooperate) and D (defect, which means not to cooperate). There are 4 possible strategy profiles and each profile generates a payoff for each player. The first number in each cell is the payoff of player 1 and the second number is the payoff of player 2. Again, note that player 1 chooses the row that is being played and player 2 chooses the column that is being played.

Here each player has a dominant strategy, D. This is the well-known Prisoners’ Dilemma game. Rational players, playing in rational self-interest, get locked into a ominant-strategy equilibrium that gives a lower payoff compared to the situation where both players cooperate.

Strategy s ∗ i of player i is a dominant strategy if:

That is, s ∗ i performs better than any other strategy of player i no matter what others are playing.

Here is another example of a dominance solvable game. We find the equilibrium of this
game by iteratively eliminating dominated strategies.

We can eliminate dominated strategies iteratively as follows.

This gives us (Middle, Left) as the unique equilibrium.

If we want to derive an equilibrium that does not rely on specific features such as dominance, we need a concept of equilibrium that applies generally to all games. As we show below, a Nash equilibrium (named after the mathematician John Nash) is indeed such a solution concept.

To find out the Nash equilibrium we must look for the mutual best responses in terms of payoff.

Mixed strategy
A mixed strategy s i is a probability distribution over the set of (pure) strategies.

Once we include mixed strategies in the set of strategies, we have the following
existence theorem, proved by John Nash in 1951.

Existence theorem
Every game with a finite number of players and finite strategy sets has at least one Nash equilibrium.

Let us now consider sequential move games. In this case, we need to draw a game tree to depict the sequence of actions. Games depicted in such a way are also known as extensive-form games.

The notion of a strategy is fairly straightforward in a normal form game. However, for an extensive-form game, it is a little bit more complicated. A strategy in an extensive form game is a complete plan of actions. In other words, a strategy for player i must specify an action at every node at which i can possibly move. 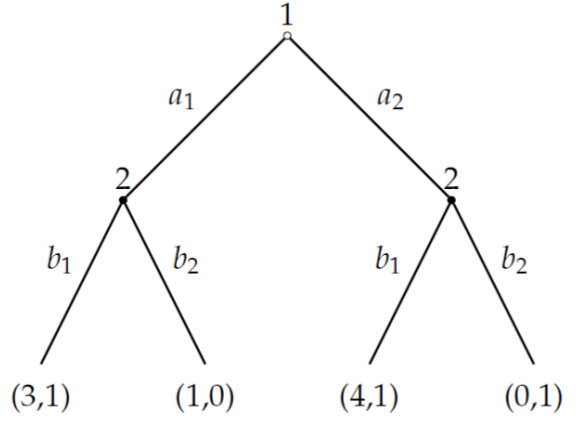 We can now define a subgame perfect equilibrium.

It should be clear from the definition that the set of subgame perfect equilibria is a refinement of the set of Nash equilibria.

Backward induction need not work under imperfect information: you cannot fold backwards when you come up against an information set. Indeed, this is why the concept of a subgame perfect Nash equilibrium is more general compared to backward induction.

In a one-shot game, rational players simply play their dominant strategies. So (D, D) is the only possible equilibrium. Suppose the game is repeated. Can we say something about the behaviour of players in such ‘supergames’ that differs from the behaviour in the one-shot game?

While the logic is inescapable, actual behaviour in laboratory settings differs from this. Faced with a large finite number of repetitions, players do cooperate for a while at least. Therefore, it is our modelling that is at fault (or, the players are being "irrational"). To escape from the logic of backward induction, we can assume that when a game is repeated many times, players play them as if the games are infinitely repeated. In that case, we must apply forward-looking logic as there is no last period from which to fold backwards.

Folk theorem
The Folk theorem is the following claim. Consider any pair of payoffs (π 1 , π 2 ) such
that π i > 1 for i = 1, 2. Any such payoff can be supported as an equilibrium payoff for
high enough

A central assumption in this text is that people make the best choices they can given their objectives... Many situations are more complicated in that they involve strategic interaction. The best one person can do may often depend on what another does. p175

Best response: A strategy that produces the highest payoff among all possible strategies for a
player given what the other player is doing.

Nash equilibrium: A set of strategies, one for each player, that are each best responses against one another.

Dominant strategy: Best response to all of the other player’s strategies.
p182

Indifferent among Random Actions
In any mixed-strategy equilibrium, players must be indifferent between the actions that are played with positive probability. If a player strictly preferred one action over another, the player would want to put all of the probability on the preferred action and none on the other action.
p186

Best-response function: Function giving the payoff-maximizing choice for one player for each of a continuum of strategies of the other player. p189

Focal point: Logical outcome on which to coordinate, based on information outside of the game. p192

Proper subgame: Part of the game tree including an initial decision not connected to another in an oval and everything branching out below it.

Subgame-perfect equilibrium: Strategies that form a Nash equilibrium on every proper subgame.
p197

Backward induction: Solving for equilibrium by working backward from the end of the game to the beginning.
p199

Trigger strategy: Strategy in a repeated game where the player stops cooperating in order to punish another player’s break with cooperation.
p202

Incomplete information: Some players have information about the game that others do not.
p208